After 20 years being kept at bay, the Taliban have taken back control of Afghanistan, sparking a political and humanitarian crisis.

For Frank Magazine, writer Bel Jacobs speaks to Afghan human rights activist Dewa Khan about the fears and the enduring resistance of the Afghan people.

Chaotic scenes at Kabul airport last month showed Afghan citizens desperate to escape living under the rule of the Taliban, clinging to the wheels of planes, sometimes falling from them. “That speaks very clearly to how frightened people are, of what Taliban rule will bring, that they’re really willing to risk their lives in such very extreme ways, to get out of the country,” said Guardian’s senior international correspondent, Emma Graham-Harrison.

They have much to fear, and women in particular. Despite previous promises to form an inclusive administration, the new Taliban interim government has been drawn exclusively from loyalist ranks, with hardliners in key posts – and no women. Afghan women, including the country’s women’s cricket team, will be banned from playing sport. Images of Afghan women have been painted over. Female and male university students in Afghanistan now study, separated by curtains, in class.

Despite this, hundreds of protestors including many women are taking to the streets. Amongst them, some were not afraid to criticise the Taliban. “We demand freedom of speech, democracy, national resistance against the Taliban,” one young female protestor told the BBC. “We are not afraid of death. We are the young generation. Our voices will make history.”

Meanwhile, campaigners continue to try to get those most at risk from the Taliban out of the country. One of these is human rights activist Dewa Khan, who has been watching events unfold from London, where she has been living for several years.

Dewa Khan, you were in Kabul just this June with work.

Dewa Khan: Yes. It was beautiful. Every morning, the city was shining with the sun. Everyone could go wherever they wanted. With their husbands, with their family to the park. In peace. We had freedom, equality, boys and girls studying in the same class. We went out to the cafes with friends, sitting and drinking and talking about work, about the future, about children. The government had been building schools in every village; everyone was going to school. We could see a future.

It changed in one night.

One night. On August 14th, we had our president. On August 15th, when Afghan people woke up, the Taliban had taken over Afghanistan. They took everything: the president’s palace, the parliament. Everything.

I was supposed to be going back in August. I had my ticket. My friend was saying to me, please. ‘Wait one week. Something is happening.’ I said: ‘no, Kabul won’t be taken. Kabul won’t fall.’ I never thought it was possible. Everything changed, over one night.

You are still speaking to your contacts in Afghanistan?

Dewa Khan: Yes, I’m talking to people every day. They know I was an aid worker in Afghanistan so they call me to say please, help us get out. Because it’s very hard for them to leave. The Taliban are going door to door, taking people out and killing them. Educated people, especially women and girls, doctors, young men who had been working with the government, charity workers: they’re in danger. They’re on a kill list. Because the Taliban want to eliminate all opposition.

How are they staying safe at this time?

Dewa Khan: Those who are on the kill list, they are very scared. They’re hiding underground. Some of them have travelled to small cities, where no one knows their names, or they are hiding in relatives’ houses. Some of the girls are telling me that they will fight, they will raise their voices so that Afghanistan can go back to how it was before the 15th.

We in the West forget how safe we are when we protest.

The women in Afghanistan are very brave. The other day, some women were protesting and they were beaten. The Taliban will bring so much pain to the girls, to whoever raises their voices. After the demonstration they will kill all of them, to silence them so that they can rule the country.

Some reports have made it sound as though the Taliban want to be regarded as less extreme. Do you have any trust in them?

Dewa Khan: Absolutely none, there is no trust. Whatever they say to the media, they are lying. They said they won’t kill people, but we have proof. The same day they landed in Afghanistan they went door to door, taking everything, killing those who had been working for the government, for the NGOs, the Americans, the British.

Who would support the Taliban? Everyone has lost a loved one, because of the Taliban, and now they will be our leaders and we will live under their leadership? No. We would rather live in slavery in another country. But not with those people.

Those young boys. [A day after the Taliban took control of Kabul, two young men including 19-year-old national team football player Zaki Anwari fell from the wings of a US C-17 aircraft leaving Kabul after losing grip of the plane’s exterior]. They knew they would be killed but they accepted that because it would be better to be killed than let the Taliban decide over you.

It’s difficult to imagine how frightened someone must be to make that decision.

Dewa Khan: We are terrified. Everyone is terrified: the women, girls, men, children. Everyone is crying. Over the past 20 years, we built this Afghanistan with our blood. We tried so hard.

We were told that there was a future for us in Afghanistan, for our women, our children, our carers; that there was freedom. The Taliban bombed us but we didn’t give up. We were trying to make it our country so that everyone could feel welcome and everyone could at least live the life they wanted.

All of that was taken away by President Joe Biden’s decision to drop us and run from the country. Everyone is on the run right now. That is why I’m trying to help people get out. That’s why I am raising funds – to get people out.

How can you make that happen?

Dewa Khan: Right now the borders are closed but as soon as the borders are open and the airport comes into use again they will definitely take refugees. Through charity support, the UN and Western governments, there is still hope we may still be able to save our brothers and sisters in Afghanistan, who are facing death and oppression at the hands of the Taliban. If we work together, we can take them out to a third country, help them to get visas to those countries. Slowly, slowly, they will take out the borders as well because no one in Afghanistan can survive under the Taliban regime.

Not everyone can leave.

Dewa Khan: No, only those people with passports and visas can leave. Most people in Afghanistan don’t have passports because they didn’t think they would have to travel anywhere. They are simple people, kind people. They tell me: if everyone runs away, what will happen here? We will stay. If they kill us, that’s fine. If they don’t kill us, we will work here for our people because there is also a humanitarian crisis happening in Afghanistan: 20 million of the 40 million living here are displaced. It’s a poor country.

How can people here in the West support people in Afghanistan?

Dewa Khan: Donate to the charities. If people could donate, we could save the people most in danger and after that we can donate to the people staying in Afghanistan, so that they can have a normal life.

But we should raise our voice, not forget about the women of Afghanistan. We have to keep asking why [did the Western countries give up on us]? We were promised freedom, a country, like any other country, freedom, women’s rights, children’s rights. Why did they hand us over to the Taliban, an extremist group which is dangerous, not just for Afghanistan, but for the rest of the world.

Where is the humanity right now? In the UN, in the Western countries? They’re closing their eyes. Everyone is watching what is happening in Afghanistan. Please. We beg. Don’t leave Afghanistan alone. Don’t leave Afghan women to be uneducated. We have a right to education, to higher education. And to work. Because most of the women are widows. What can a widow with children do if they don’t allow women to work? How can she feed her children? They killed the men, our husbands, our brothers, our sons.

If we just sit quietly, it will get worse. It will give the women of Afghanistan more courage, more strength if they know that women in the West have not abandoned us. We won’t be quiet here. Even if we die, we will raise our rights.

BEL JACOBS FRSA is a writer and speaker on climate justice, animal rights, and alternative systems in fashion. 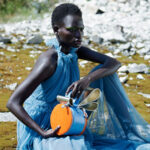 Ostwald, tradition in the modern

Take a Book, Share a Book – The Little Free Library by the Ocean