Our flower for July is the gentle Water Lily, which symbolises innocence, purity, rebirth and peace. Here is our guide to this watery wonder.

There is nothing like gazing into a pond at clutches of glorious water lilies and their huge thick, circular pads. Ranging in colour from white to pink, purple and orange, they instantly inspire a sense of calm, peace and wonder. They have been the inspiration for many works of art over the centuries. The impressionist Monet, for example, painted over 250 paintings of these beautiful blooms in his garden in Giverny, France.

The Water Lily is one of the world’s most ancient flowers. Not to be confused with the Lotus, the Water Lily is an aquatic plant from the Nymphaeaceae family. Its name is derived from the Greek myths of the nymphs, ethereal maidens made from water, not flesh and blood.

Water Lilies are a different species (Nymphaea) to the Lotus (Nelumbo). The Lotus bloom grows above the water, whereas the flower of the Water Lily rests on the surface. Another difference is that the Water Lily’s petals are sharp but the Lotus has rounded petals.

The Water Lily is considered a July flower. It is also associated with the star sign Pisces, as it is born and lives in water. It ranges from the tropical varieties to the hardy cold-water plants, which can survive through the winter. It usually flowers from June to September and whilst it appears to be floating around on the water, the Water Lily has roots that are buried in the mud at the pond’s bed.

As water lilies live and die in water, they have connections to spirituality, renewal, life energy, and rebirth. They also embody the cycle of life, where they open during the day and close at night, grow, bloom, reproduce and die. The African Garden

The Water Lily is the national flower of Bangladesh and Sri Lanka. It was also grown in Ancient Egypt. The Egyptians were expert growers and images of water lilies have been discovered in the tombs of pharaohs. It is thought this regal flower represented strength and power.

The Water Lily, like the Lotus, has much religious significance. In Hinduism, it represents resurrection and rebirth because the flowers close at night and open each morning. Water lilies also mean purity in several religions as they grow out of the mud, yet the flower remains pristine.

In Buddhism, the Water Lily, like the Lotus, represents enlightenment, as it emerges out of the muddy depths into the light.

The Greeks believed that the lily flower sprouted from the milk of the goddess Hera and represented both chastity and virtue. They are a symbol throughout Christian mythology of the Virgin Mary’s purity and denote humility and the innocence restored after death. Garden Guides

Besides being beautiful to gaze at, the Water Lily brings many benefits to the pools it inhabits. Water lilies provide shade, which cools the water and protects fish, frogs and other pondlife from sun exposure. They help to stop algae from growing as they block out a lot of sunlight. They also absorb nutrients in the water that would otherwise feed algae. In this way, they keep their habitats cool, clean and healthy.

So, not only are water lilies beautiful but they are doing their bit for the environment.

The Future of Psilocybin 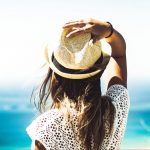 Tapping Into Happiness with Poppy Delbridge