Melanie Sykes talks to Marco Pierre White about reconnecting with his childhood, his love of nature, and his conservation mission at his hotel, The Rudloe Arms.

When did you get switched onto environmental issues and why?

Marco Pierre White: I have always loved nature since I was a child. Yes, I was brought up on a council estate but it was on the very outskirts of Leeds. As a boy, I used to walk to the top of my road, across the golf course, and there I was on the Herald Estate. I remember watching the swallows’ first flight and then watching them line up on the telegraph wires to fly back home; seeing all those hatches of insects and those swallows take them out, having a feast before they left. It’s not the same anymore.

In what way? What changed?

Marco Pierre White: Well, let me give you an example. You’re driving down the country lane in your car. How many insects ended up on your windscreen? The answer is none, because of pesticides. Thirty years ago we had 10-acre fields, now they’re 100-acres. Farmers have ripped out the hedgerows so the insects have lost their food and their habitat.

In the 1970s, farmers started to cut down all these hedgerows for the simple reason of maximising every inch of that farm for food. But we produce so much food, more food than we need.

Here is another example. In the old days when I was a kid, there were lots of curlews, a beautiful bird with a very long beak. On a farm where I would spend a lot of my childhood, they had little marshes. So that’s why curlews have long beaks – so they can feed. But what happened is they drained out those marshes and farmed over them – so they took away their habitat. Curlews have gone down enormously because of these modern-day farming methods.

If you look at the grey partridge, a beautiful bird that I used to have in my back garden, in the back hills where I lived, they’re also under threat. Songbirds’ food has disappeared, their habitats have disappeared – yet birds of prey are protected.

But what really tells you what is happening in the countryside is when you drive down that road and you don’t have bugs on your windscreen anymore.

Why are you so passionate about insect life in particular?

How have you been making changes on your land and what changes have you seen as a result?

Marco Pierre White: We’ve got 18-acres here so now I’m developing that for nature. We’ve built beetle banks out of logs. We also build stonewalls, which you can see as you drive up; newts and slow worms hibernate in them. As they start to break down and decompose, they attract insect life.

We have successfully brought back hedgehogs which we never had when we first came. Now, we’ve got more hedgehogs than anything because we’ve created a habitat for them.

By digging ponds we have damselflies, we have dragonflies, and we have newts. I went to clean out a pond last week and I saw all these tadpoles in it! We have grasshoppers and crickets now, which we never had. We have muntjacs too, the smallest of deer.

We also have the wildflower meadows. We brought back cattle and sheep. Every year we release pheasants. So we’re giving back.

Do you use your land as a source of food for the hotel?

Marco Pierre White: Well, the bacon is from our wild pigs that live in the woods. It’s old-fashioned bacon with lots of fat. We have our own beef and lamb. We have Aberdeen Angus cattle and Wiltshire Horn sheep – plus they do the gardening for you as they eat all the grass!

We’ve heard about the birds. And your bees?

Marco Pierre White: We have a beekeeper and when the honey comes in season, we split it with him. That’s another reason why we built ponds – for the bees. You can build hives and plant wildflower meadows but if there’s no water they are not going to live are they? So, you have to think about everything, really.

And are you looking forward to welcoming people back or have you got used to having nobody here?

Marco Pierre White: There is one side of me that thinks it’s fantastic and the other side thinks I don’t want all these people. I’m not being funny, I’m being honest. Since they’ve opened all the pubs and restaurants with gardens, I haven’t been to one of them. I like being here. On the other hand, it’s not very pleasurable being in a big house, just you and your daughter.

When I was 16, I started my career at Hotel St George in Harrogate, the job was live-in and I liked the comfort of all those people around me in that hotel if that makes sense. It’s like a family.

When the Rudloe is filled with clients, it injects life into it. When you see people sharing the grounds, enjoying the house and everything is working – it’s rather beautiful. I think if you have a big house then you’ve got to share it.

What’s the main thing you’ve learned on this rewilding journey?

Marco Pierre White: What’s most interesting about nature is that it doesn’t take long for it to take over again, just given the chance. It’s like when you see these salmon rivers which are polluted; once they’ve been cleaned up they are back to where they were within five years. It’s amazing how quickly nature repairs herself. 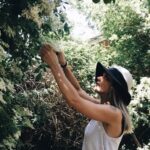 Face Facts – Why Fibre is Your New Best Friend

Why Retrofit is the way forward

Extreme E: On Track to Save the Planet